Grab a video camera, a bucket of ice water, and donate to a great cause! 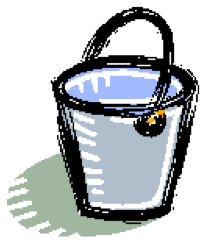 If you are active on Facebook or Twitter, there’s no doubt that you have seen more than a few people posting videos of themselves dumping ice cold water on their heads.

The ALS Ice Bucket Challenge has consumed social media in the last few weeks. It all started with a simple campaign to raise awareness and funds for Amyotrophic Lateral Sclerosis, ALS, also known as Lou Gehrig’s disease. Now celebrities, tech moguls, politicians, and probably your neighbors, are all accepting an icy cold drench and challenging friends to do the same thing.

Isn’t it amazing what social media and technology have done to our society? Who would have guessed that people would be so willing to soak themselves with freezing water and then share that embarrassing (and uncomfortable) moment all across Facebook, Twitter, and YouTube! Is it because it’s such a worthy cause or because it’s so trendy? Probably a little of both.

If you can remember back to the 90’s and one of the most popular TV shows, Saved By the Bell, then you may recall the classic episode where Kelly Kapowski, a popular cheerleader, was dating Screech, a nerd at Bayside High. One of the friends, Jessie Spano, was quoted saying, “Well Kelly’s the most popular girl in school. If she wore a pizza on her head and called it a hat, there’d be a run on pepperoni.”

Today, that fictional pizza has become a very real, cold bucket of water, and all because the cool kids are doing it. The payoff, though? It’s forced people across the nation to really recognize ALS, and furthermore, created a trending reaction across the web and social media.

TrioTel even joined in on all the fun! Find our video at www.facebook.com/triotelcommunications.