Four Ways to be Social Online 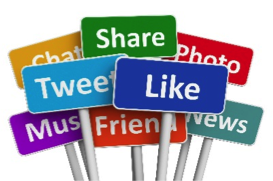 Do you ever wonder what all the social media fuss is about? Well don’t worry because you aren’t alone. Social media has sky rocketed in the last 5 years, making it hard to keep up to date on all the social network trends. For many of us, staying connected online with our friends and family has become part of our daily routine.

Nowadays, there are many different types of social media outlets, however, Facebook, Twitter, Instagram, and Snapchat have led in popularity among users. If you are curious about joining the social media hype, here are a few details to help catch you up on a few of the front-runners.

Facebook: The #1 most popular social media platforms created in 2004. Facebook is a profile-based social networking site where users create their own profile and send out friend requests to others that they choose to connect with. Today, there are over 1.7 billion active Facebook users worldwide including people of all ages who enjoy following posts and pictures from their friends, old classmates, family and other interests. Also, there’s been a prevalent trend in business advertising among small business owners and large companies alike. Businesses are able to set up their own page and market to specific customers with their current promotions and business highlights.

Twitter: Twitter is a service for friends, family, and coworkers to communicate and stay connected through the exchange of quick, frequent messages. Users post tweets, which may contain photos, videos, links, and up to 140 characters of text. These messages are posted to a user profile, sent to followers, and are searchable via Twitter search.

Instagram: A fun and simple social media site where users basically create an account and share photos or short, one minute videos online with friends. Photos and videos can be shared both publicly and privately through other social networking platforms such as Facebook, Twitter, Tumblr, and Flickr. Instagram was actually bought by Facebook in 2012 for $1 billion. At that time, the network had 30 million users and today has more than 400 million active users.

Snapchat: The fastest growing, commonly used social media app, especially for millennials. Snapchat, like the other social networks, is a way to interact with your friends but through pictures and short videos that can be viewed for up to ten seconds before it disappears. Snapchat is also a fun messaging app that allows users to add captions, doodles, or graphics before sharing it with friends.